30-07-12 // THE IDEOLOGY OF PUBLICATION – CONVERSATION WITH BERND UPMEYER 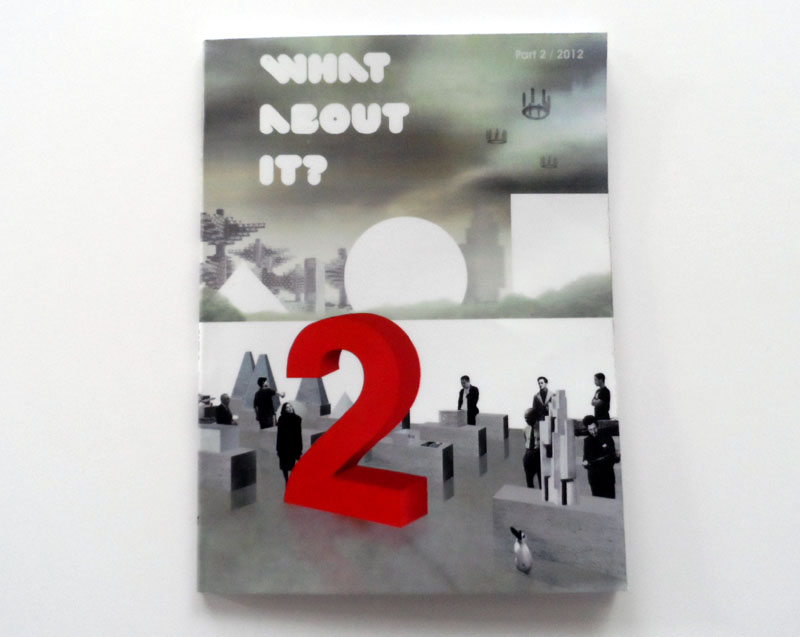 Bernd Upmeyer has been interviewed by the Beijing-based magazine WAI on the topic of ideology. The results of the conversation have been published in their second issue.

[…]
WAI: MONU is willing to explore the concept of urbanism from every possible angle, including the social, political, ideological and artistic spheres. However, something that is not being discussed is the contribution of MONU to the visual culture of architectural publications. An important element of the unique attraction of MONU is its layout (varying from article to article), typography and provocative covers that have featured Godzilla, Jesus, Marilyn Monroe, Superman, and John Lennon. Was the aesthetic approach for MONU a derivative of the content or was it a choice assumed from the beginning as a main concept for the magazine?
Bernd Upmeyer: The fact that every article is different in terms of the layout was a clear choice from the beginning and we have been applying that concept ever since – although a little less wildly today. From the beginning, this choice was meant to emphasize the multiplicity and diversity of the articles and viewpoints and, on the other hand, the result of the fact that I always had trouble with magazines in which I got lost, not knowing whether one article ends, another one starts or images in between are merely advertisements. Some magazines are doing that excessively. I have always considered that very annoying. Therefore, this principle of the layout is not a derivative of the content – however, the emphasis on diversity clearly is. Principally MONU’s content always comes first and its layout only serves the content and its readability. MONU’s visual culture should not be overrated. When it comes to the covers, we started very naïvely, not knowing how relevant and important a meaningful and attractive cover for a magazine is. We started getting a bit of a clue when the magazine was already three years old and on display and for sale in more and more bookshops. Seeing the magazine on the shelves, especially in the bookshops in Rotterdam, made us think more about its cover, as the cover was the only thing people would see while walking around the store. In addition to that we recognized an increasing interest in the magazine and the moment more people are looking at you, you better get a better haircut, so as not to look like a fool. Thus, you can say that ever since the summer of 2006, starting with issue #5, we are putting more energy in finding interesting and inspiring images that represent the content of each issue. Since the “Godzilla” on the cover of #5 we are trying to provide more direct access to the still invisible content of each issue. But it is not simply about provocation, but more about the belief that a magazine with uncompromising and daring content also needs uncompromising and daring covers.

WAI: While the value of MONU as a platform for open discussion and experimental speculation is undeniable, the importance of strategies such as the “open call for contributions” should not be overlooked. Recent exhibitions like Archizines highlight a resurgence of independent publications that very often are created following this selection tool. When you created MONU, did you see it as an independent exercise or did you anticipate its paradigmatic potential? By the same token, do you feel that MONU, apart from its intellectual contributions, has served as a model for a young generation of independent magazines?
BU: No, we definitely could not foresee its paradigmatic potential, but we were only hoping that it would help us making an interesting magazine. You have to understand that by the time we founded the magazine, we neither knew how to make a magazine, nor did we know any writers or potential contributors. We had no network whatsoever. Not that we believe in networks. Today, we actually avoid making use of our network, as we want to keep the magazine open to new people while avoiding inviting people that we know as most magazines traditionally do. But what is a choice today was a constraint in the past, as we simply had no idea how to get contributors for the magazine. We had a lot of ideas for topics, but no ideas for authors. Therefore, the “open call for contributions” was for us at that moment the only way to start a magazine. That we receive today so many proposals and submissions of such a high standard is incredible and fantastic and we are very grateful for that. I would be very happy if MONU served as a model for a young generation of independent magazines as I feel that that we truly did some kind of pioneering work here. As I mentioned before, in 2004, when we introduced the device of “open calls for contributions” in our first issue as a tool of finding contributors, this was not common for architectural and urbanism magazines. Being a role model shows that we have created something meaningful and interesting. That is a big honour for the magazine itself and for its authors. But what is more important is that in recent years MONU has contributed to bringing back a new critical edge to the architectural and urban discourse and if this approach has inspired others to start similar magazines, that can only be judged positively.

WAI: How would you describe the evolution of MONU from the first issues to the current ones and how do you envision the future of MONU?
BU: The evolution of MONU has to be understood as a continuous attempt – driven by tireless curiosity – to improve the magazine with every single issue with regard to the diversity and quality of the contributions, the relevance of the articles in general and in relation to the particular topic of the issue, the relevance of each topic taken by itself, its appearance and layout, and finally its financial sustainability. In that sense, I believe that our last issue was the most elaborate – however, most of the earlier issues contain a lot of very good and relevant contributions too, coupled with the charm of something that is in the process of becoming something very special and unique. I see the future of MONU in the same vein: as a magazine that will continuously improve, yet will continue to take risks and flirt with failure. And as long as people are still motivated to contribute and we are not getting tired of initiating new topics and investing time and energy into something that will probably never have a secure and stable financial base, MONU Magazine on Urbanism will keep looking forward to its next issue.

Read the entire conversation in Interviews. 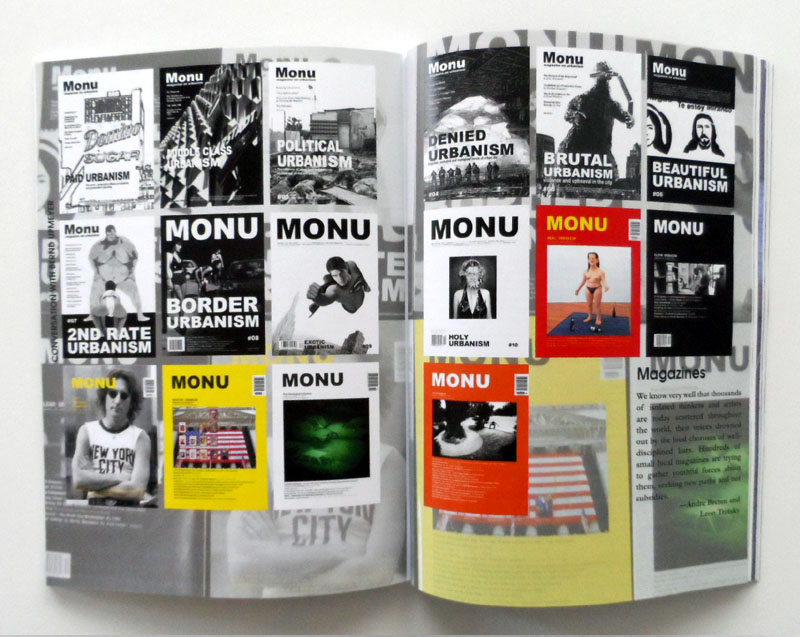 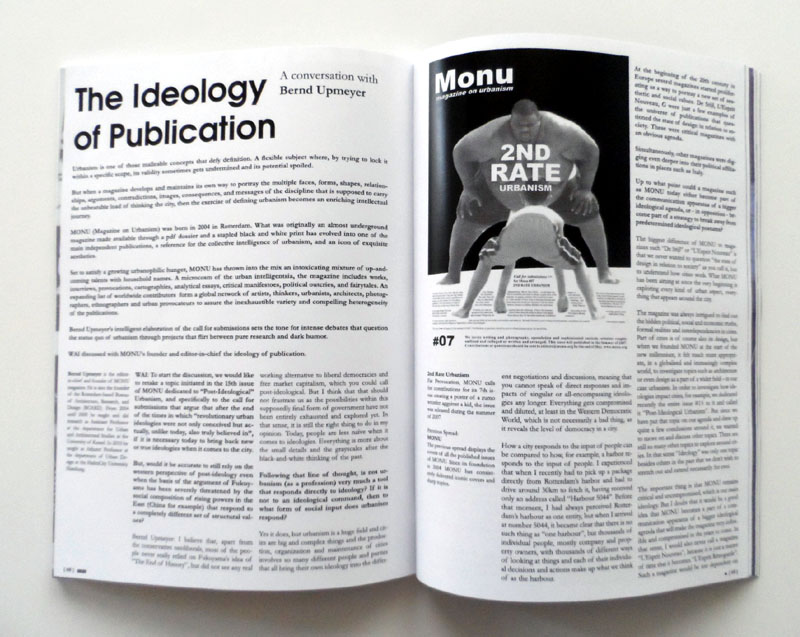 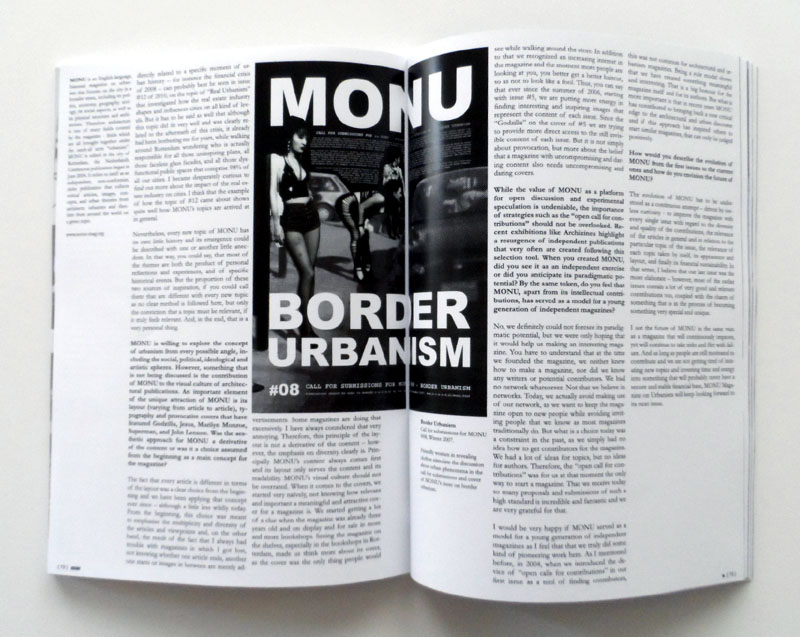